How to stop a puppy peeing on the carpet and how to clean up when he does.

How to stop a puppy peeing on the carpet and how to clean up when he does.

We asked our customers to write to us with their experiences with puppies and dogs – what causes dogs to have accidents, could there be some underlying medical issues and how do you clean up after your dog has urinated on carpets or furnishings.

If you’d like to share a story with us about your pet, we’d love to hear from you. Contact us here with your article or short story, provide your US shipping address and we’ll send along a gift for any story we use on our website.

Karen P wrote to us from Arizona and shared her story and clean up tips for her puppy Bobby!

This started in June last year when I rescued a pup from the shelter. He’s a mixed black lab and was just a few months old when his owner turned him into the shelter. He was a gorgeous little creature, my husband and I were actually looking for a smaller dog, a terrier, but we just fell in love with Bobby and knew we had to bring him home. 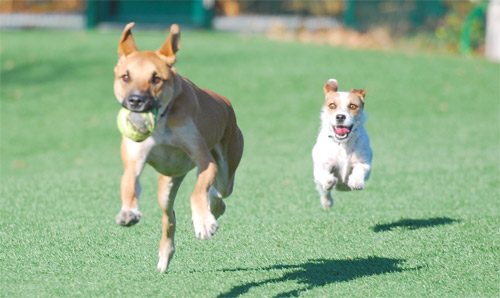 It was made clear to us at the shelter that Bobby hadn’t had any puppy training when it came to toilet time, he was quite comfortable going anywhere in the house and didn’t have any shame whatsoever! After about a week or so we were already getting a little overwhelmed with the situation as he’d picked out three different spots in the house to pee already. Cleaning up after the little guy was OK for a while, but we’d neutralize an area and he’d just wander off and find somewhere new!

We used several different dog pee odor neutralizers for carpets, before we came across Uricide online. My husband actually found the product on Google and picked up a gallon bottle, as things were pretty bad with Bobby at the time. We’d learned from friends who had a dog that it’s important to get a soiled area cleaned and odor free quickly, following an accident, as they can soon develop into permanent spots for toilet duty, unless you fully remove the smell.

With Uricide, we found that generally one application was enough. We’d simply remove any solid waste with paper towels, wash the area with lukewarm soapy water, dry with towels then spray on the pet odor eliminator. We’d leave it in the rug for a few hours then just wipe over the area with a paper towel and any stains and urine odors were gone.

The most important lesson we learned with getting Bobby house trained was to get him on a regular potty schedule. At first it was a case of taking him out any time there was a sign from him that he might want to go. It gets a bit old but it was better than having to deal with too much pet cleanup. But the daily walks need to be done at the same time each day so he starts to know when there’s a chance for potty break coming up and he became a little less frantic and unpredictable.

This took around six weeks to instill in him and during that time there would be occasional accidents were he’d pee on the carpet and we’d have to clean up. With Uricide we found that the pet odors were completely removed. We were a little self conscious at first about the potential for pet smells building up in the home and us becoming nose blind to it. But we’d always ask neighbors who came by, some of whom were dog owners, and we’d always be told that our home was free from any doggie smells!

We also kept Bobby crated when we were going to be out of the home during the day. Dogs are different to cats when it comes to crating. Cats like a small space, dogs like room to be able to turn around easily. What we found generally was that Bobby needed to pee whenever we let him out of his cage, pretty much withing thirty minutes of finishing any meal, soon after drinking any water and just before bed time.

What we also learned with Bobby was to give him a lot of praise and positive reinforcement whenever he peed outside. It’s one thing chastising him when he pees on the carpet and you have to clean up the urine odors, but he needs to be told when he’s doing the right thing, outside.

We were told that it takes about two weeks to house-train a puppy, but because Bobby hadn’t had an early inductions it took him a couple of months to find his rhythm.

So long as you’re particular about cleanup of urine stains and any feces, and you use the right pet odor elimination products to deal with dog pee and feces, there’s no reason why your house/home needs to suffer, or show any signs of unwanted puppy toilet activity.

Again, Uricide worked great for us as a natural enzymatic cleaning products to remove dog urine odors and bad smells, and we also found that it works on other things too. My husband didn’t realize when he bought the gallon that it’s a heavily concentrated liquid so you can get a lot of cleaning product out of a gallon bottle. So with 2/3rds of the gallon remaining we found other places to use it for it’s odor elimination properties. Being a natural enzyme based product you can use it safely anywhere in the home, so we found it worked great on carpeting in general, on soft furnishings and even on our outdoor sports clothing!

Thanks for a great product!